Pro-mining interests have been outnumbered 200 to 1 at the recent Grants Pass and Gold Beach public meetings re the proposed 5-year ban on new mining claims. Hundreds of citizens as well as representatives from key public agencies have spoken in support for clean water, wild rivers, and salmon. Click below for a September 12 Del Norte Triplicate article and for a September 8 Jefferson Public Radio interview with Grant Werschkull.

The City of Crescent City was represented at both meetings along with Board members for the Big Rock and Gasquet Community Service Districts. The City and these Districts are the major water purveyors in Del Norte. The CA Department of Fish and Wildlife (CDFW) was also represented at the Grants Pass meeting —- and their comments were followed by a roar of applause.

In summary, it was a great couple of nights for the protection of clean water and wild rivers.  Without question we have much work ahead to prevent strip mining in the headwaters of the Smith, Illinois and Pistol Rivers and Hunter Creek, but the TEAM scored big for the proposed mineral withdrawal. Click here to send in your comments before September 28. Watch the 8-minute Emerald Waters video for glimpses of the North Fork Smith and other threatened Kalmiopsis rivers.

Thanks to a grant from the Coastal Conservancy and contributions from State Parks and CDFW, the last significant manmade barrier to salmon migration in the 25,594 acre Mill Creek watershed has been removed. Over one kilometer of excellent spawning and rearing habitat is now available and is expected to be quickly colonized by coho salmon who have been regularly observed downstream of the barrier 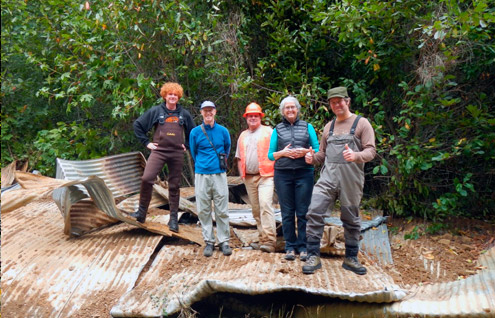 Monty Larson, Grant, Brian Merrill, Patty and Justin Garwood. Brian and the State Park crew prepped the culvert site, Monty and Justin removed the fish and amphibians, Brian and crew removed the culvert and it has been slayed and appears beneath the feet of the group. We will have many more images, but thought you might like to see your people in their triumph over the salmon barrier.

Join a fabulous team of volunteers including the HSU Natural Resources Club for our annual river clean-up. Click here for more info.

The Distribution of Juvenile Salmonids and Seasonally Available Aquatic Habitats within the Lower Smith River Basin and Estuary (August 2015) is now available. Click here to view or download. You can also find the Reconnaissance of Salmonid Redd Abundance and Juvenile Salmonid Spatial Structure in the Smith River with Emphasis on Coho Salmon (April 2012) which is based on 2 years of field surveys across the basin. Special appreciation to CDFW and the Fisheries Restoration Grant Program for their partnership and commitment to advancing salmon and watershed science. See more in our Document Library.

Fire in the South Fork Canyon! 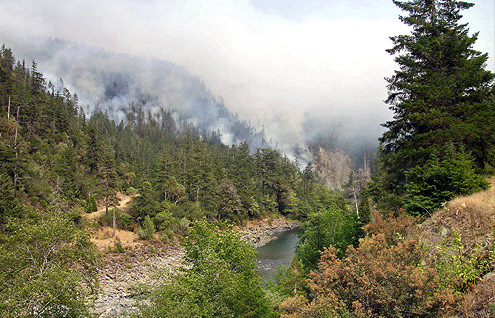 July lightning strikes brought several fires to the watershed including the Coon Fire which burned approximately 5700 acres before being doused by a late August rain. The fire burned very close to several South Fork residences including the Rock Creek flat, but fortunately mild temperatures, high humidity, and little wind allowed this fire to be a more positive rather than catastrophic ecological event

Extensive fuels were burned and it appears the fire burned primarily below-the-canopy. Special thanks to USFS and Cal Fire Crews who worked day and night to protect the South Fork community, Caretaker Andrew Orahoske who endured the smoke and managed the Rock Creek Ranch water system —- and the Del Norte Fire Safe Council, CDF Alder Camp Crews, and the many volunteers who have worked with us over the years to be ready for fire.