Mill Creek is a 25,000-acre temperate rainforest located on California’s North Coast, just south of the Oregon-California border. Home to ancient redwoods, hundreds of native plant species, and two critical salmon-bearing streams, Mill Creek was identified as a priority for protection in the 1920s. However, its owners chose to harvest all but 200 acres of the ancient trees, and re-planted for future harvest.

Acquisition of Mill Creek was a crucial first step in protecting the land and its phenomenal habitats; ongoing restoration work is essential to the area’s long-term protection. Mill Creek presents a premier opportunity to combine cutting-edge forest restoration techniques with the restoration of wildlife habitat, providing protection and opportunity for recovery of critically important salmon and steelhead populations – including the federally listed coho salmon – and wildlife such as the marbled murrelet, northern spotted owl, mountain lion, Pacific fisher and marten.

The key goal of ecosystem rehabilitation is to promote self-maintaining ecosystem processes by reducing the footprint of past land use activities and advance the development of old-forest characteristics. Achieving this goal will optimize benefits to indigenous fish and associated wildlife habitat, while providing opportunities for compatible public park use, research, and education.

Much has been accomplished since the forest was protected in 2002 – forest restoration work has been completed on over 5,500 acres, 70 miles of partially decommissioned logging roads have been removed, in-stream habitat quality for salmonids has been improved, habitat monitoring has shown that salmon populations are strong, and public access has increased.

Mill Creek presents extraordinary challenges for maintaining and restoring wildlife and fish populations. The legacy of decades of intensive industrial timber management threatens the ecological integrity of the natural systems that support Mill Creek’s wildlife and fisheries. A once-complex ancient forest mosaic was converted into a forest dominated by a dense, even-age conifer plantation with limited structural and biological diversity. High road densities threaten to choke the creeks with sediment, destroying salmon and trout spawning and rearing habitat.

A three-year program has been designed to continue the emergency forest protection and restoration actions described in the Forest Ecosystem Restoration and Protection Project (FERPP) and the Landscape Stabilization and Erosion Prevention Plan (LSEPP). The coordinated forest restoration efforts at Mill Creek, including ecological thinning and wildlife monitoring has been provided by the Wildlife Conservation Board.

Forest Restoration: The purpose of the Forest Restoration Program is to promote forest restoration efforts to the benefit of marbled murrelet, northern spotted owl, Pacific fisher and sensitive riparian species by increasing grow capacity in nursery and expanding involvement of the community in providing youth educational and job training opportunities.

Mill Creek Nursery: The purpose of the nursery is to increase capacity of propagation facilities, including shade house and additional propagation materials and supplies. Nursery practices will be evaluated by a consulting service, which will also evaluate soil and water quality. Youth training program will be integrated into nursery operations to provide educational opportunities to youth and volunteers in the Del Norte community.

Thanks to a grant from the Coastal Conservancy and contributions from State Parks and CDFW, the last significant man-made barrier to salmon migration in the 25,594 acre Mill Creek watershed has been removed. Over one kilometer of excellent spawning and rearing habitat was made available and was quickly colonized by coho salmon who had been regularly observed downstream of the barrier.

The existing road network includes at least 290 miles of roads. During the rainy season, many roads in the project area have the potential for catastrophic failure, which would destroy important salmon and trout spawning and rearing habitat. The road network must continue to be managed to reduce risk to native salmonids. In the longer-term, road removal reduces the cumulative potential for failure and related impacts to aquatic habitat and eliminates maintenance costs. Due to the annual heavy rainfall and high concentration of roads, the highest risk to aquatic life is due to erosion and the potential of high sediment loads from failures at road-stream crossings, in-sloped roads traversing steep terrain, and log landings.

There are 65 miles of high-risk roads and 180 stream crossings with a high risk of delivering sediment to streams and seriously impairing water quality and salmonid habitat. In Spring 2005, DPR completed a road inventory which increased these numbers to: 129 miles of high-risk roads, 350 critically unstable stream crossings, 210 landings and three instream barriers to prime spawning and rearing habitat.

The purpose of erosion control activities is to maintain and enhance water quality by reducing sediment contribution to priority wild salmon and trout streams by decommissioning and re-engineering selected road segments.

Treatment of Roads: High priority road segments are treated to reduce the threat of catastrophic failure through a combination of decommissioning and re-engineering. Over the 3-year period, 25.8 miles of road will be removed; field crews will revegetate 106 road/stream crossing areas that have been decommissioned in Rock Creek and the East Fork of Mill Creek drainages; 74 landings will be stabilized, and 60 landslide sites stabilized.

Stream Crossing Repair/Improvements: Many of the existing culverts installed by the former landowner are undersized and not properly installed to withstand a 100-year storm event. These culverts are being replaced with improved high capacity culverts in order to prevent road failure and large-scale sediment deposits instream.

Mill Creek instream restoration, before and after

Surveys conducted in eight streams on the Mill Creek property in 1997 show LWD abundance varied widely with greater abundance in the West Branch of Mill Creek and least abundance in Rock Creek. Conifers, primarily redwoods account for most in-channel LWD. Forest stands adjacent to low gradient channels are currently dominated by hardwoods and lack the large conifers necessary for long-term recruitment and retention of instream material.

The Mill Creek watershed is one of the most productive tributaries for salmon and steelhead in the entire Smith River Basin — all salmonids in the Smith River Basin are also present in Mill Creek. Mill Creek contains habitat for state and federally listed or proposed aquatic species, including coho salmon, steelhead trout, marbled murrelet, northern spotted owl, mountain lion and Pacific fisher. 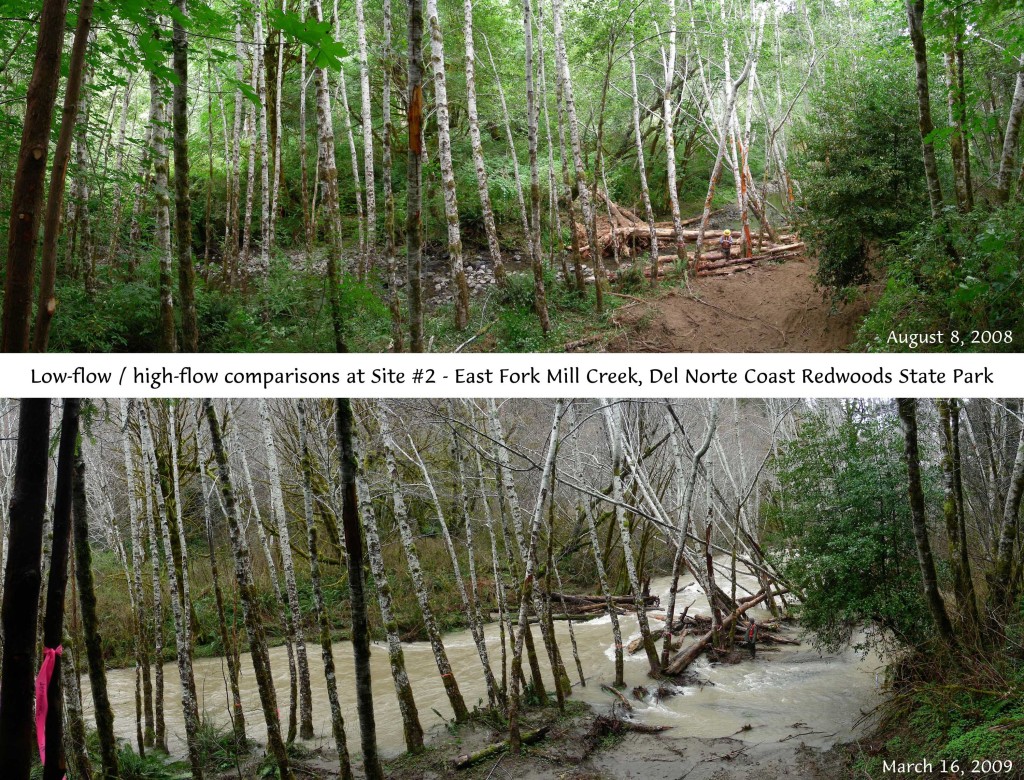 However, past logging and road building activities have dramatically altered the natural vegetation and geomorphic function of the terrestrial and aquatic ecosystems. For example, downed woody material, which plays a critical role in influencing and regulating watershed processes, is nonexistent. It was removed during the “stream cleaning” projects of the 1980′s.

SRA, in cooperation with State Parks has launched a “wood loading” program focused on the East Fork of Mill Creek.

The purpose of the program is to enhance stream resiliency to sediment pulses, improve gravel sorting dynamics and increase habitats for wild salmon, and other aquatic species. Terrestrial species may benefit from in-stream projects through improved retention and nutrient cycling of salmon carcasses. Marbled murrelet, northern spotted owl, and other species of concern will benefit by the implementation of an integrated habitat protection, enhancement and monitoring program.

The Smith River Alliance, in cooperation with many conservation partners including Save-the-Redwoods League, Wildlife Conservation Board, Department of Fish and Wildlife, Department of Parks and Recreation, State Coastal Conservancy, and California Trout, succeeded in adding the 25,000-acre Mill Creek property to the State Parks system in the summer of 2002. Acquisition of this property by the State of California promises to provide protection and opportunity for recovery of critically important salmon and steelhead populations — including the federally listed coho salmon. Mill Creek now presents a premier opportunity to apply state-of-the-art watershed restoration techniques to the benefit of the region’s wildlife, including marbled murrelet, northern spotted owl, mountain lion, Pacific fisher and marten.

The Mill Creek property is a forty square mile area located approximately six miles southeast of Crescent City in Del Norte County, California. The property is characterized by steep mountainous terrain typical of the Coast range, with an elevation range of of 200-2,400 feet above sea level. The property is bordered by Jedediah Smith Redwoods State Park to the north, Del Norte Coast Redwoods State Park to the west, Smith River National Recreation Area to the east, and private industrial timber lands to the south.

The property has a long history of timber harvest dating back to the 1850s. Between 1954 and 2000, the property was intensively managed for commercial timber harvest, which included constructing an extensive road network and converting most of the property from old-growth to early-successional coniferous forest. Approximately 200-acres of old-growth forest remain in five separate stands.

Until its acquisition in 2002, Mill Creek was a missing piece in a jigsaw puzzle of preserved lands. Its protection has the potential to provide complete watershed protection for Jedediah Smith Redwoods State Park, while forging landscape linkages between the region’s ancient coastal forests and the inland forests of the Klamath-Siskiyou bioregion.

Moreover, at a time when declining salmon populations have become a crisis issue for communities throughout the western United States, the protection and restoration of Mill and Rock Creeks will provide significant additional opportunity for the Smith River to be managed as a demonstration watershed or refugia for native fish and other aquatic species.

There is broad-based academic interest in this property as a rich living laboratory for exploring many of the issues associated with fisheries, forest health/management, and biodiversity. In addition to its overwhelming promise for salmonids, and key protection of the watershed of the ancient redwood forest, the property includes a serpentine area on its eastern edge supporting numerous threatened and endangered plants.

Cedar Creek is a tributary of the Smith River that drains roughly two square miles of land, 100% of which is in Jedediah Smith Redwoods State Park. The lower reach of the stream contains good spawning and rearing habitat for anadromous fish. In 1949, a culvert was installed on Cedar Creek in order to construct a road. That culvert is a barrier to fish passage today.

The objective of the Cedar Creek Project was replacement of the culvert with a pre-fabricated bridge and development of a post-project monitoring program.

Primary partners: SRAC, DPR, DFG, Pacific Coast Fish, Wildlife and Wetlands Restoration Association (PCFWWRA), and the California Coastal Conservancy. The Cedar Creek watershed is roughly two square miles in Jedediah Smith Redwoods State Park. In 1949 a culvert crossing was installed on Cedar Creek for an access road 600 feet upstream from the creek’s confluence with the Smith River, blocking fish passage. Habitat surveys conducted from the 1970s and 80s to the present have recognized Cedar Creek’s potential to support anadromous fish, but all earlier attempts to remedy the passage situation with culvert baffle installation and jump pool enhancement have failed. Design and assessment work was funded by CDFG and SRA and a current proposal (submitted by PCFWWRA, see below) under submission to CDFG will fund culvert replacement with a bridge.

Watch a video about fish passage restoration on Cedar Creek.