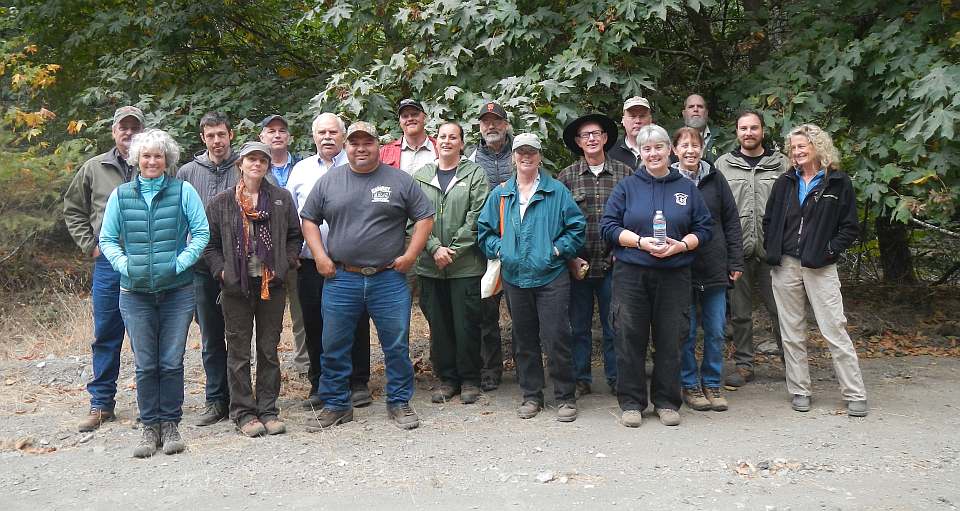 SRA has teamed up with nine motivated stakeholder entities and Six Rivers National Forest to launch a “Collaborative” initiative to advance habitat restoration, fuels treatment, and other projects across the National Recreation Area.

The SRCs objective is to work together in cooperation with the Forest Service to develop projects that addressed the critical threats and worked towards meeting the SRCs Conservation Targets and Values, including a healthy Smith River watershed, and resilient bio-diverse Forest ecosystem. 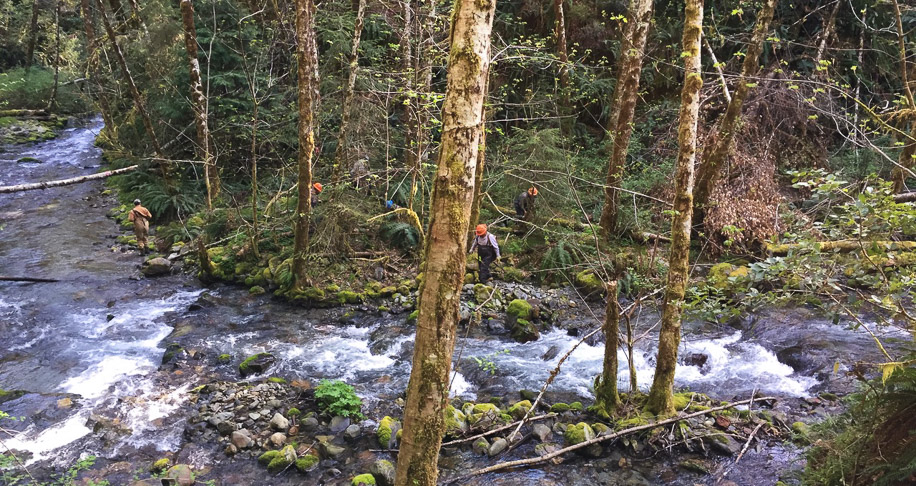 Prior to acquisition by the USFS beginning in the 1960s, a large portion of the Little Jones Creek watershed was private land and was logged – including streamside stands near the stream edge. Tree and shrub species rapidly colonized open riparian patches in these harvested riparian areas. As a result, red alder (Alnus rubra) now dominates the riparian tree community over many historically-logged stream reaches in Little Jones Creek. This current riparian forest dominated by red alder, with a closed canopy and native shrubs conifer seedling establishment and growth, and the development of a diverse riparian forest.

One of the most ecologically important riparian conifers in the Smith River basin, Port-Orford Cedar (POC), Chamaecyparis lawsoniana, has been significantly reduced in numbers along many streams by the introduced exotic fatal root pathogen, Phytophthora lateralis. A local strain of POC has been developed that is resistant to infection from this pathogen. Planting the riparian areas in Little Jones Creek with this resistant stock would re-establish this important riparian ecosystem component.

With funding from the Smith River Alliance, the Smith River National Recreation Area (NRA), in conjunction with the SRC and the Pacific Southwest Research Station, Arcata, has designed a research project to assess the efficacy of small-patch (< 0.6ac/0.25 ha) silvicultural treatments to accelerate the re-establishment of large conifers, including Port-Orford Cedar. The project would utilize disease-resistant strains of POC to restore riparian corridors that were logged. Forest Service Best Management Practices encourage establishment of disease-resistant Port-Orford-cedar in plant communities where their numbers or ecosystem functions have been reduced.

Restoration is aimed to have both short- and long-term benefits for stream and riparian habitats and species. Selective removal of riparian alder trees followed by successful re-introduction of large conifer species would benefit salmonid fishes in the short-term by increasing primary productivity and foraging conditions and in the long-term through positive influences of large conifer debris on channel morphology and habitat complexity.

Little Jones Creek provides an excellent opportunity to test an approach to addressing these issues while monitoring for possible impacts to aquatic vertebrates. The stream supports a resident population of coastal cutthroat trout, Oncorhynchus clarkii clarkii. Due to the natural anadromous barrier at the mouth of Little Jones Creek, no federally threatened coho salmon are present in the stream and project area. Outcomes of this research will inform and assist in the development of future plans for aquatic and riparian restoration. 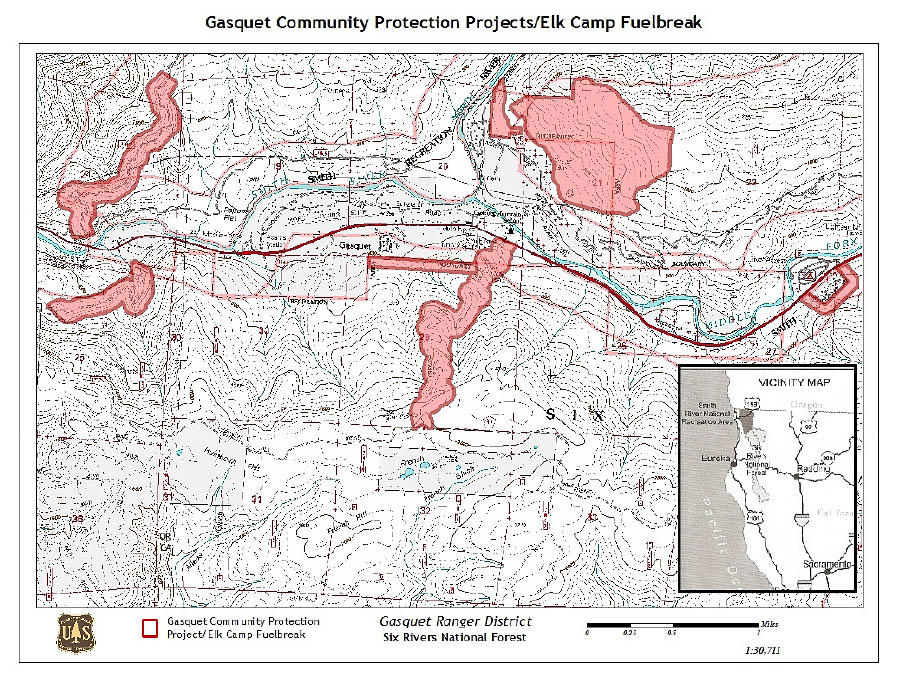 The Six Rivers Gasquet Community Fuels Reduction Project will treat three hundred acres of land adjacent to the town of Gasquet, and urban interface community. The three hundred acres has been segmented into six different fuel breaks which are strategically placed to assist in control efforts of fires threatening the community of Gasquet.

The proposed program will involve three types of field activity and a project coordination-oversight component implemented through a partnership entity known as the Smith River Collaborative (SRC). The three field activities are: removal of hazardous fuels within six defined fuel breaks; (2) hand piling and covering of the fuels and other woody debris for later burning/removal by USFS staff and; (3) removal of invasive Scotch and French Broom within one specified area. These activities are described in more detail below.

Partnerships and Project Coordination and Oversight

This is a project of the Smith River Collaborative (SRC), which involves nine stakeholder groups in partnership with Six Rivers National Forest. In addition, other project partners are the California Department of Forestry and Fire Protection. Alder Camp Conservation Crews (Cal Fire) and the California Conservation Corps (CCC).

The project has been funded by the National Fish and Wildlife Foundation and will be completed over three years. The expertise of USFS staff in defining a project with attainable prescriptions and the substantial experience in fuel reduction from partners Cal Fire Alder Conservation Camp (Cal Fire), California Conservation Corps (CCC) and Del Norte County Community Development Department – Roads Division will ensure project success.

The Alder Conservation Camp, located in Klamath, CA, is a joint operation of the California Department of Corrections and Rehabilitation (CDCR) and California Department of Forestry and Fire Protection (CALFIRE). The Camp’s primary mission is to provide inmate firefighting crews for fire suppression activities in the Humboldt-Del Norte Ranger Unit Areas. In addition, inmate hand crews provide a work force for conservation and community service projects across the region.

The California Conservation Corps is the oldest and largest state conservation corps program in the nation. Modeled after the original federal Civilian Conservation Corps created in 1933 by President Franklin Roosevelt, today’s CCC program was signed into law by Governor Jerry Brown on July 7, 1976.  Governor Brown envisioned the program as “a combination Jesuit seminary, Israeli kibbutz and Marine Corps boot camp.”

From this inspired beginning, the CCC has grown to its current size as a permanent state agency with residential and nonresidential sites throughout the state employing thousands of young men and women, age 18 to 25, for a year of natural resource work and emergency response. The CCC seeks work conserving or enhancing the state’s natural resources or providing another public benefit, and work offering corpsmembers an opportunity to boost employable skills. The young women and men of the Corps work hard protecting and restoring California’s environment, responding to disasters, becoming stronger workers, citizens and individuals through their service.

The Regional Office of the Forest Service will contribute an additional $440,000 to the project, for a total project budget of $770,526.

This funding will be used to implement critically important watershed infrastructure improvements that benefit nearly thirty miles of stream and associated roads and trails in the Smith River National Recreation Area (NRA). The project will benefit fish, wildlife, sensitive plants, and enhance water quality — while also improving recreation access across the NRA.

“Partnership and cooperation made this project possible,” said SRC Co-Chair Grant Werschkull of the Smith River Alliance. “When interested and motivated parties are willing to work together in a zone of agreement there’s no limit to what can be achieved. The partnership involving SRC and the Forest Service is really exciting. The SRC is motivated and the Forest Service has been an outstanding partner.”

Click here to learn more about the Smith River Collaborative.