The Upper South Fork of the Smith River has been recognized for its solitude, tremendous beauty and the unparalleled opportunity it provides to catch a Coastal Cutthroat Trout.

In 2018, the Fish and Game Commission added an additional 41 miles of the South Fork Smith watershed to the Wild Trout Waters network, officially recognizing the unique quality of the fishery and bringing the total number of Smith River miles to 141. This new designation includes the South Fork Smith River, from the confluence with Craigs Creek upstream to the confluence with Goose Creek, including the tributaries of Craigs Creek, Coon Creek, and Rock Creek. The South Fork Smith and its tributaries contain self-sustaining populations of both Coastal Cutthroat Trout and Coastal Rainbow Trout.

In addition, the South Fork Smith River and its tributaries were designated as Heritage Trout Waters, which further recognizes the beauty, diversity, historical significance, and special values of California’s native trout. Heritage Trout waters support fish populations that best exemplify indigenous strains of native trout within their historic drainages and provide anglers with the opportunity to catch native trout in a way that is consistent with native trout conservation.

The Heritage and Wild Trout Waters designation recognizes the beauty, diversity, historical significance and special values of native trout across California. Statewide, there are now twelve designated streams which include the Clavey River, a tributary of the Tuolumne River, the Golden Trout Creek, including tributaries, from its confluence with the Kern River upstream to the headwaters, and the Upper Kern River, above the Forks of the Kern.

All of these rivers are wild and alive with unique native fish, all an important part of our California history. 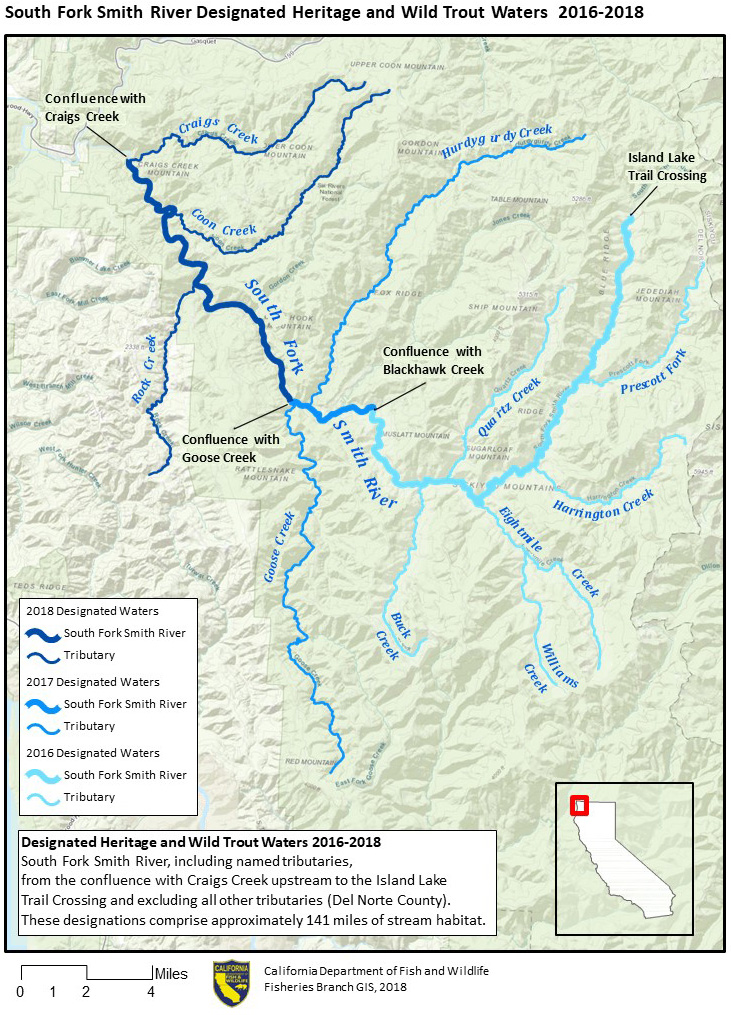 Letters in Support of the Heritage and Wild Trout Waters designation

Coastal Cutthroat Trout which can be found in South Fork

Coastal cutthroat trout are anadromous trout found in the coastal watersheds of northern California, which is the southern end of their range. In addition to the Smith River, they can be found in several Humboldt Bay tributaries like Little River and Redwood Creek, as well as a number of coastal lagoons like Lake Earl, Big Lagoon and Stone Lagoon.

Coastal cutthroat trout have a highly variable life history ranging from fully anadromous to resident. They are the most freshwater – dependent of the anadromous salmonids, migrating to the ocean for only a few months in the summer. The fish can be identified by their abundant black spotting and distinctive red slash along the jaw. In California, these fish reach about 16 to 22 inches.