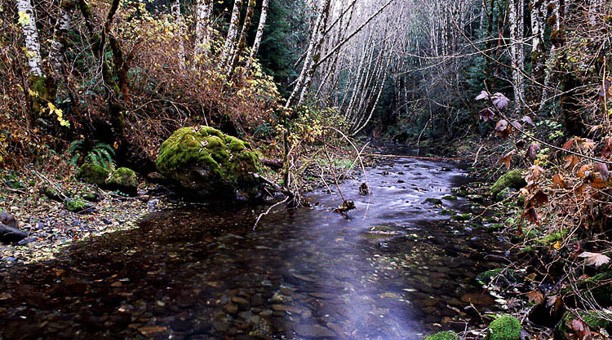 The Smith River is a stronghold for salmon, steelhead and cutthroat trout in California; at least five species in multiple runs use the river. It is unparalleled in its combination of natural river flows, protected habitat and healthy fish populations.

The protection and enhancement of the smaller Smith River, the next major river north of the Klamath River is an investment that will help sustain salmon fisheries in California and will also help support recovery of salmon populations in the Klamath River.

The need for forward thinking restoration is the key to ensuring that the Smith remains one of the premier salmon strongholds along the Pacific Coast.

The Smith River Alliance (SRA) has been working to identify priority habitat restoration projects basin-wide, but especially in the lower river and estuary — nature’s nursery for salmonids and other aquatic species. Completed restoration projects will enable more coho, Chinook, steelhead, coastal cutthroat trout, and other aquatic species to use historical habitat areas. Strong partnerships with private and public organizations are key elements of our approach.  Potential improvements to habitat in the estuary and the lower reaches of the river are significant because of the tremendous role these areas play in the life cycle of salmonids.

The Smith River Basin encompasses 719 square miles of northwestern California and southern Oregon. It has unique status since it includes the last major free flowing river in California that drains directly into the Pacific Ocean. The Smith is famous for its water clarity, its world-class salmon and steelhead fishing and its majestic stands of coastal redwoods. Because of both its geology and its limited development, the Smith River is one of the healthiest river systems in California. The vital existence of anadromous salmonids in the Smith River and the viability of the region’s economy depend upon the long-term health of the entire basin.

Historically, salmon were very abundant in the rivers and streams of the Pacific Northwest and the Smith River was no exception. Since that time, diminishing abundance of Chinook, coho, steelhead, and cutthroat populations has been documented coast-wide and in adjacent basins like the Chetco and Klamath Rivers (Busby et al. 1994). Existing data indicate that Smith River populations of Chinook, coho and steelhead are most likely in good overall health compared to rivers in other regions of California. Although Smith River coho runs are not as relatively large as in other rivers, twenty years of spawning surveys on Mill and Rowdy Creeks indicate viable, self-sustaining coho populations (Waldvogel 1980-2001). Huntington et al. (1996) identified the Smith River as possessing the only healthy winter steelhead population in California.

In the context of Endangered Species Act recovery objectives, Smith River fish may very well provide a valuable source of recolonization in other rivers given the natural straying rates of these anadromous fish.

SRA believes that the National Recreation Area and associated watershed lands should be managed by sound scientific principles. SRA promotes holistic, watershed, and ecosystem-based problem solving in an effort to ensure that short and long term management decisions protect the area.

SRA has active restoration projects on the Lower River & Estuary as well as Mill Creek. Other efforts under the restoration umbrella include the newSRNRA Collaboration.