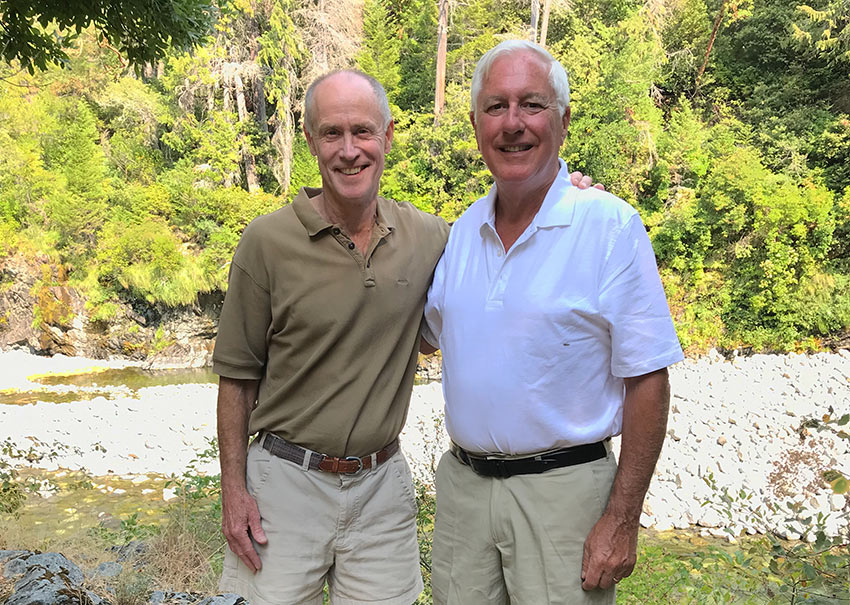 A Leader in Establishing the Smith River NRA

SRA is proud to announce Doug Bosco (right) as the 2020 recipient of the President’s Award for Outstanding Stewardship. A Congressman for California’s 1st District from 1983 – 1991, Doug was the lead author of legislation that established the Smith River National Recreation Area — which has protected the Smith River in California from the ravages of strip mining. Here’s Doug (right) with Executive Director Grant Werschkull on the banks of the South Fork Smith River.

It was just about thirty years ago this year that Congressman Doug Bosco introduced legislation to establish the Smith River National Recreation Area. It was challenging legislation to introduce and advance because it required close coordination with such diverse parties as the Forest Service, local government, conservationists, and the timber industry. However, Congressman Bosco was determined and the legislation was passed and became law in 1990. It directed that all National Forest Service land within the Smith River watershed in California be included in the new National Recreation Area (NRA).

The NRA designation has been significant for many reasons, but none more important than the withdrawal of these public lands from new mining claims. Earlier in this decade we learned how precious this protection has been in California when mining companies began pursuing permits and water to advance strip mining on Smith River watershed land in Oregon, outside the NRA. Tens of thousands of citizens along with local, state, and federal agencies all requested a ban on mining on this and other nearby areas. The Obama Administration’s Department of the Interior responded in 2017 putting in place a temporary 20-year ban on new mining claims on the Oregon part of the Smith watershed.

Legislation has been introduced to make the temporary mining ban in Oregon permanent. The most recent bill was introduced last fall by Oregon’s U.S. Senators Merkley and Wyden which would expand the NRA to include all remaining unprotected lands in Oregon —- some 58,000 acres, delivering a permanent mining ban and additional Wild and Scenic River protections.

These recent efforts underscore the critical benefits on-the-ground of the original legislation that established the NRA.

In addition to the NRA legislation, Doug has championed and led many important campaigns and projects which have resulted in critical natural resource conservation in California. Among his many accomplishments he was a lead author of the California Wilderness Act and he also a co-authored legislation to preserve the Cordell Bank National Marine Sanctuary which protects the coast of northern California from offshore oil drilling.

Doug been on the State Coastal Conservancy Board since 2003 and serving as their Chairman since 2004. This agency is responsible for an amazing legacy of coastal access, protection and habitat restoration projects along the California coast. Here in Del Norte County the State Coastal Conservancy has funded many projects including improvements in and around the Crescent City Harbor, habitat restoration benefiting salmon and other aquatic species, and acquisitions that established the Point St. George Heritage Area.

It is our great honor to award Doug Bosco the President’s Award for Outstanding Stewardship. Thank you, Doug, for your extraordinary efforts to protect the Smith River. We also thank you for your leadership and excellent work that benefit all citizens and visitors to California’s coastal and wildland resource areas. We are grateful for your leadership and service!