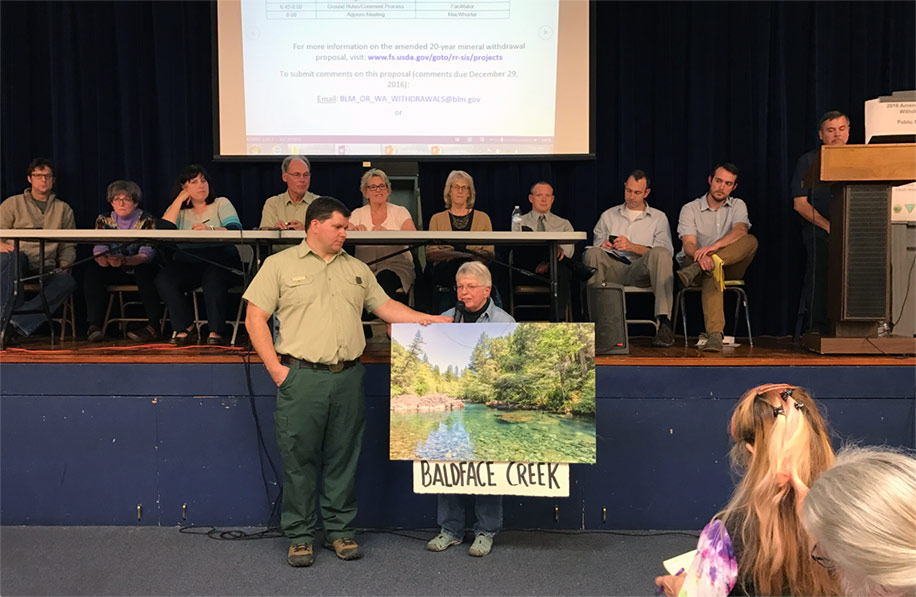 A 20-year mining ban is now in place for North Fork Smith and other Kalmiopsis wild rivers.

The Obama Administration took administrative action to protect an area in southwest Oregon’s Rogue-Siskiyou National Forest with the highest concentration of designated Wild Rivers in the contiguous U.S. The action safeguards the area’s wild salmon and steelhead habitat, and preserves recreation for paddlers, and fishermen, for 20 years.

The Secretary of Interior – supported by the Secretary of Agriculture, U.S. Forest Service, and Bureau of Land Management – published a public land order on in January 2017 withdrawing the lands from mineral entry for the next 20 years. Spurred by the area’s natural beauty and threats from mineral development, a broad coalition of conservationists and recreational users worked together for more than two decades to protect the area.

An international mining company is actively pursuing plans to develop a nickel strip mine in the headwaters of the Wild and Scenic North Fork Smith River in Oregon. The Red Flat Nickel Corporation is proposing to locate their mine southeast of the Kalmiopsis Wilderness within the Baldface Creek drainage, which is a key tributary to the North Fork Smith. The Smith River is one of the “crown jewels” of the National Wild and Scenic River System, and the Smith River National Recreation Area protects the river and its tributaries in California from numerous threats, including mining. Unfortunately, these protections do not extend across the border into Oregon, which is home to numerous important tributaries.

If developed, the proposed mine will pose a serious threat to public drinking water supplies.

According to the U.S. Environmental Protection Agency, the metal mining industry is the largest source of toxic pollution in the country. Test drilling alone has significant potential to contaminate and impair the public drinking water of downstream communities in Del Norte County, CA including Gasquet, Hiouchi and the City of Crescent City. These communities are on record opposing the mines. Additionally, Baldface Creek is a significant spawning and rearing tributary for Chinook salmon and steelhead, and is a known hot spot for the endangered coho salmon. The emerald-green water of the Smith River and its tributaries are a stronghold for these critical species in part because it is the only major undammed river in California. A strip mine would have significant impacts to these values.

The region faces numerous threats from mining development. In addition to the mine proposed in the North Fork Smith watershed, Red Flat is also pursuing a mine in the headwaters of Hunter Creek and Pistol River, which are found along the Oregon Coast. A second company (RNR Resources) is pursuing a proposal to mine in the headwaters of the Wild and Scenic Illinois River in the Rough and Ready Creek Basin.

Washington D.C., Feb 26 — By a 227 to 200 vote, today the U.S. House of Representatives passed the Southwestern Oregon Watershed and Salmon Protection Act, (SOWSPA) amended to  House Bill 803, the Protect America’s Wilderness and Public Lands Act. SOWSPA, introduced by Representatives DeFazio (D-OR) and Huffman (D-CA), calls for a temporary mineral withdrawal in the area to be made permanent. It now goes to the Senate, where Oregon Senators Wyden and Merkley will push for its passage.

A broad coalition of tribes, local governments, local businesses, conservation groups, sportsmen and commercial fishermen came together to protect the area’s Wild and Scenic Rivers, world class fisheries, and exceptional recreational opportunities from the threat of mining in the headwaters of the Wild and Scenic Smith, Rogue and Illinois rivers and Hunter Creek and North Fork Pistol rivers. In 2016, the Obama Administration approved the  20-year Southwestern Oregon Mineral Withdrawal to provide interim protection for 101,000 acres of river-rich National Forest and BLM lands. Communities in this remote corner of Northwest California and Southwest Oregon depend on these rivers for drinking water, outdoor-recreation, a fishing and tourism-based economy, and rural way of life.

Click here to sign a petition sponsored by American Rivers and Smith River Alliance and join with thousands of citizens who oppose strip mining for nickel in the headwaters of the North Fork Smith River. Scroll down for updates on the status of the protection effort.

Sonny Perdue, U.S. Secretary of Agriculture has stated in letters to U.S. Senators and Congressmen that the Southwestern Oregon Mineral Withdrawal is secure for now. Click here for a copy of his letters to Senators Wyden and Merkley and Congressman DeFazio — and for related press. Click here for a December 2017 letter from Trout Unlimited (TU) leadership to Secretary Perdue and Secretary of the Interior Zinke underscoring the significant fisheries values of the Oregon rivers protected through the 20-year mineral withdrawal. The TU letter also highlights the extensive public involvement and engagement supporting the mineral withdrawal process —– and encourages the Secretaries to maintain the completed Southwestern Oregon Mineral Withdrawal.

For years, Smith River Alliance and coalition partners have been pushing hard to get the maximum protection possible—a 20-year mineral withdrawal—in place before mining companies advance plans to strip mine the wild headwaters of the iconic Smith, Illinois and Rogue Rivers. The Department of the Interior initially proposed a 5-year withdrawal. Although this would be a worthy safeguard, with the prospect of Congressional gridlock, the public has pressed for the maximum interim protection for these remarkable rivers and their precious headwaters, with over 99% of comments favoring a 20-year withdrawal. In September, the U.S. Forest Service and BLM amended their original proposal for the Southwestern Oregon Mineral withdrawal to extend its duration to 20 years. A new public comment period amending is now open through December 1, 2016. A second comment period demands more work — but when that work is standing up for the Smith River – and we can do it together – we relish the opportunity. With your help we can secure a 20-year withdrawal before the end of the Obama Administration. Over 45,000 Favorable Comments Received on the Environmental Assessment – May 2016 See Coalition technical comments here.

The Rogue River-Siskiyou National Forest, with the Medford and Coos Bay Districts of the Bureau of Land Management, has prepared an environmental assessment (EA) for the 2015 Southwestern Oregon Mineral Withdrawal. The release of this EA on April 28, 2016 initiated the public comment period; written comments will be accepted for 30 calendar days. The proposed withdrawal, which is in aid of legislation proposed by multiple members of Congress, encompasses more than 100,000 acres of Forest Service and BLM-administered lands in the Rough and Ready-Baldface Creek and the Hunter Creek-North Fork Pistol River subwatersheds of southwestern Oregon. The agencies have provided multiple opportunities for public involvement and comment regarding this proposed withdrawal. Public meetings were held in September 2015 in Gold Beach and Grants Pass, drawing approximately 250 attendees to each meeting, with more than 100 members of the public speaking. Roughly 23,000 comments have been received to date, the majority of which have been in support of the proposed withdrawal. The Environmental Assessment is available online http://1.usa.gov/1TAFAZz.

Pro-mining interests have been outnumbered 200 to 1 at the recent Grants Pass and Gold Beach public meetings re the proposed 5-year ban on new mining claims. Hundreds of citizens as well as representatives from key public agencies have spoken in support for clean water, wild rivers, and salmon. ~ Del Norte Triplicate Article ~ Public Radio Interview The City of Crescent City was represented at both meetings along with Board members for the Big Rock and Gasquet Community Service Districts. The City and these Districts are the major water purveyors in Del Norte. The CA Department of Fish and Wildlife (CDFW) was also represented at the Grants Pass meeting —- and their comments were followed by a roar of applause. In summary, it was a great couple of nights for the protection of clean water and wild rivers.  Without question we have much work ahead to prevent strip mining in the headwaters of the Smith, Illinois and Pistol Rivers and Hunter Creek, but the TEAM scored big for the proposed mineral withdrawal. Watch the 8-minute Emerald Waters video for glimpses of the North Fork Smith and other threatened Kalmiopsis rivers. 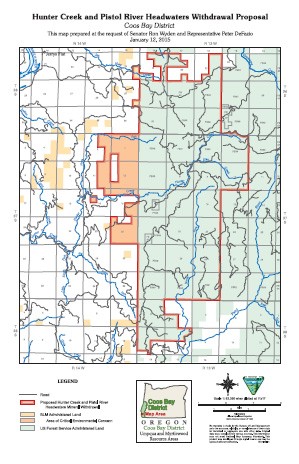 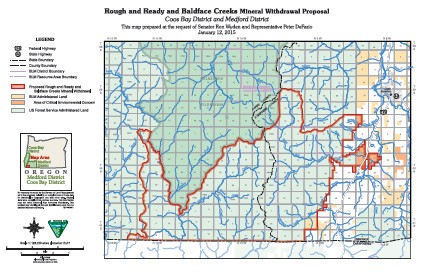 Press on the 20-year Mineral Withdrawal

View/download a PDF with select press from January 12 to January 15, 2017 on the 20-year mineral withdrawal.

View/download a PDF with select press from June 26 to September 23, 2015 on the proposed mineral withdrawal.

Water in redwood country is worth more than nickel Sacramento Bee, October 13, 2013, Op-Ed by Tim Palmer

Click on the PDF links below to read letters of support for the Proposed Mineral Withdrawal.

Support Letters to the OR Water Resources Department