As I drove to work this morning the sky was salmon pink. Big waves battered the rocky coastline of the Oregon/California border as the last of the stars faded into daylight. Clear skies and a forecast for sun at this time of year meant it was going to be cold cold cold. This was the type of day where you know that it’s sunny and warm somewhere, but not down there in those creeks. Especially not today on the winter solstice, the shortest day of the year when any reasonable warm blooded creature would be huddled up in a warm den somewhere quietly celebrating the return of the light. My drive home tonight was the same as this morning but in reverse: pink salmon on the horizon, cobalt blue above then deepening to black with a multitude of stars shining through. 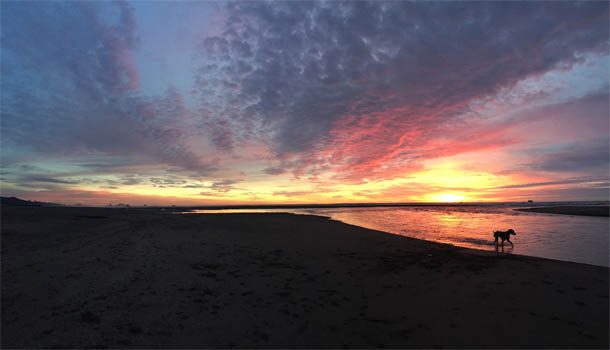 In my last post we had been waiting and waiting for the chinook, then we saw a brief burst of spawning which was then put on hold for high flows. We had some lulls in the rain with a few redds popping up in each lull. A few coho started showing up too, just to keep things interesting. Then we had a big event. In a little over 24 hours the sky opened up and dumped about 6 inches of rain on Del Norte county. This brought the river up to a raging 70,000 cfs (cubic feet per second) and that reset everything. Basically every redd out there was washed flat, several channels rearranged and some trees fell blocking our access to a few of our reaches. The high water also brought in a new flush of coho, and its about the right time that it could have brought in some steelhead too. 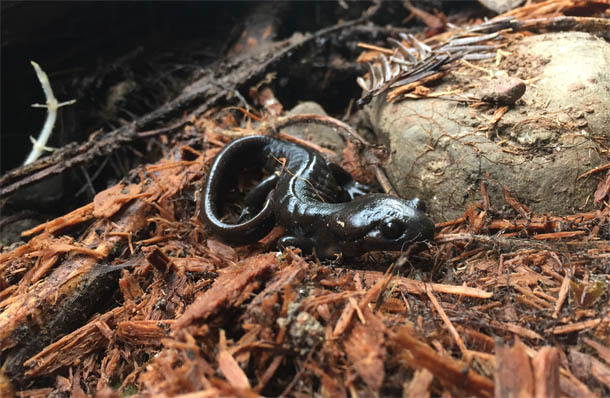 Earlier I was concerned that the chinook run may have been over, but as the water dropped out this week we found a new flush of chinook redds. Definitely not peak spawning, but still a good 5-8+ new redds in each reach. We also saw another flush of fresh looking carcasses. It’s hard to say without looking at the data just how strong or weak the chinook run this year was, but it still seems like it was a little low. The Klamath had a really poor chinook return this year, and I don’t think the Smith run was as bad as that, but we never did see entire riffles completely filled with redds like we usually do. But appearances can be deceiving and that’s why we take scientific data. So we won’t really know until it’s all compiled and analyzed. 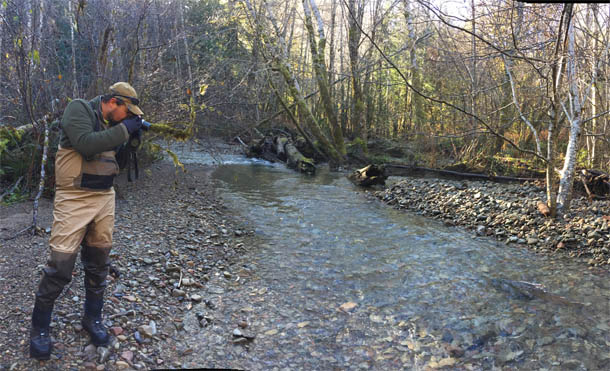 Chinook male posing for the camera

Overall this has been a pretty fun week. After this last high flow we are entering a really neat period on the Smith where any of the four Smith River salmonids might be seen. Sometimes during this period it is even possible to get a “grand slam” and see all of the species in a single reach. There are still plenty of chinook, coho are starting to be seen regularly, some anadromous coastal cutthroat are out there and maybe if we’re super attentive we’ll catch a glimpse of the blue ghost, the steelhead. When steelhead first enter the river they look almost blue, and their secretive behavior, coupled with generally higher flows makes them almost invisible. I usually don’t see many until later when they start to put on their spawning colors.

The other day Tony and I may have had such a day. As we started on our way up the creek we saw a few chinook right off the bat, then we had two coho building a redd not too far after. Near the top of the reach we surveyed a small tributary (a sub-reach is smaller than a regular reach and generally surveyed in conjunction with the reach it flows into). In the sub we saw another coho or two then we came upon something strange. It was small, only about 40cm, and just sitting in the middle of a tiny creek without trying to hide at all. “It’s a cutty!” I said as I crept right up next to it. At that point I was about 5 feet from the fish and could see it perfectly. It had a few round spots on its back but almost none on the tail and head. Cutthroat are known for their “excessive spotting” all over their bodies and this was not that. Plus the tail was forked like a salmon tail. I noticed some white on the nares (nostrils) and figured that maybe it was a coho jack (a small male that returns early from the ocean, jacks use their small size to sneak in and fertilize some eggs while the big male is busy fighting other big males. Pretty sneaky). But it didn’t have the customary white lips of a coho and maybe had a slight steelhead colored flush along the lateral line. Then it opened its mouth and it was all white. Coho have white gums and black mouths so I called it a steelhead. I took a video and later posted it to Facebook to let the masses have their say. As usual the masses said some of everything including suggestions that it may have been a pink salmon or some other exotic stray. Some jokingly suggested the possibility of hybridization or genetic damage. In any case the debate rages on. 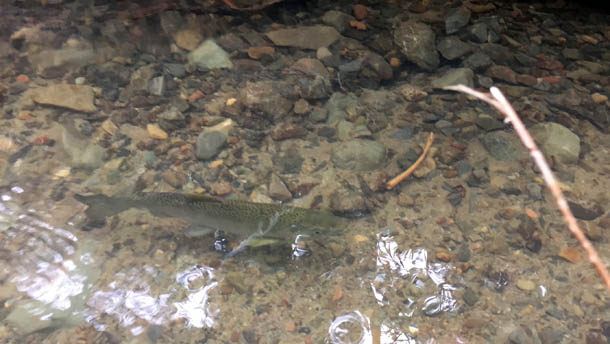 A little later in the survey we saw an actual cutthroat. It was spotted from snout to tail and definitely was not what we had just seen. So we’ll claim the grand slam. But who knows, pink salmon have been seen in the Smith, last year a sockeye carcass was found and the other crew found a chum salmon the other day. Maybe it was a masu salmon from Japan (it wasn’t), I’ve always wanted to see one of those. The canonical story is that salmon return to spawn in the same stream in which they were hatched, but a healthy dose of chaos is par for the course in any living system. If you are studying field ecology and your data starts looking too neat and orderly, it’s time to find out what you are doing wrong, because there’s always going to be some wacko pink salmon that mistakes the Smith for Southeast Alaska, and whether or not two things can hybridized you can bet some of them will try.